The Mama Negra, is the Festival in honor to Virgin of the Mercedes and for Latacunga independence Feasts.

In Latacunga, the Feast known as "Mama Negra 2019" is celebrated.
Mama Negra Feast first date is from September 23 to 28 in commemoration of the Virgen de las Mercedes and is organized by the merchants of Pichincha, La Merced and El Salto, an absolutely mestizo cultural phenomenon.

The main character of the party is La Mama Negra, always personalized by a man with a completely silent face, dressed in rich and colorful formal garments, leading the streets of the city with a horse. The black mom represents a liberated slave who takes the three types with her: two at the end of her horse and a baby in her arms.

What is the Black Mama in Ecuador?

The La Mama Negra festival takes place in Latacunga, is one of the most beautiful and traditional in Ecuador and is a completely cultural phenomenon.

Colorful costumes are the main feature of this celebration, the black mom wears:

Besides, along with Mama Negra, there are other women who wear wigs, flights and jewelry, and spread kisses among gentlemen, small covers with “allullas” among  children and flowers for spectators.

Who is the black mama?

La Mama Negra, like the other ladies, is not a woman or a black woman, and that makes her figure much more popular and attractive, since she is usually represented by one of the city's greatest personalities, according to Tradition, he accepts the role and performs it with sympathy, devotion and the spirit of a citizen.

In the popular Black Mom celebration there are a series of characters or elements of the Black Mom in the so-called "Holy Tragedy", a theatrical performance represented by the priests and parish priests with impressive costumes. The characters are:

La Mama Negra Feast is a pleasant coincidence between indigenous, African and Spanish civilizations, embodied in a monumental and amazing or tragicomedy farce starring the entire city as a great procession to El Calvario Retreat, a sanctuary dedicated to Our Lady, where the characters of an established series recite the dances of the black breast with couplets or "loas", of which the most traditional is:

"Here we are your devotees to form a crown.

Some come from afar, distance does not matter.

Your sweetness attracts us, your smile transports us.

Around your chapel tender songs sing

This town that loves you which one you deserve, Madam.

Your children in Latacunga love you more than a jewel,

they carry you in their heart; Mother, you will never be alone.

There we will be with you as in your hermitage now.

This procession passes through the Latacunga’s street, dancing and singing to the rhythm of the typical bands until midnight, when the “Midnght Mass" is celebrated. Then, all the people go to the prioste´s home, where his wife feeds and gives drinks the visitors.

La Mama Negra Ecuador, It is believed that this colorful celebration arose after the Cotopaxi volcanic eruption that occurred in 1742 when the first procession was made with gratitude to the Virgen de las Mercedes for the protection she had established in the city.
Another theory defines the main origin of the black breast in the festive events organized by blacks to celebrate their liberation from slavery in 1851 when General José María Urbina, after taking power, decided his absolute memory. It is said that blacks believed that this event happened thanks to the intervention of the Virgin of Mercy and established this feast as a tribute to her honor.

The Virgin of Mercedes or the Blessed Tragedy, declared Patron and Advocate or "Virgin of the volcano", is celebrated in the hope of protecting the city from new eruptions. 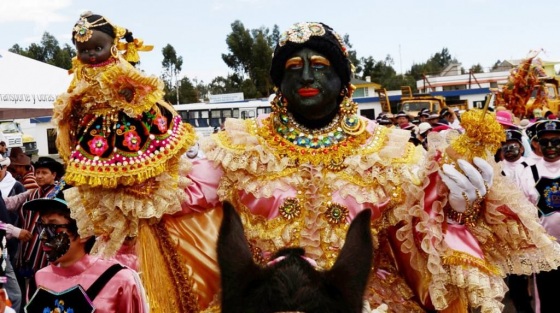