The Cojitambo Archaeological Complex, is an extensive and magical complex of ruins.

The Cojitambo Archaeological Complex is located on the Cojitambo hill, 11 km away from Azogues canton. It is an extensive and impressive complex of ruins that rise on the mountainous summit at the north and west flanks of the hill, adapting to the morphological characteristics of the terrain.

Knowing this complex is a magical experience that will take you on a trip to the past, Cojitambo  structures are a solid construction based on blocks edged with andesite rock, placed one upon another forming natural rows, joined with black earth mortar and filled with masonry. All these groups, which are complemented with other evidence of military and religious character, are articulated with the Inca's path that passes through the base of the hill, and that in the aboriginal era communicated the ancient Tomebamba with the manor Cañari de Peleusí.

The archaeological complex is quite extensive and has constructions with a level of complexity; due to that it has been divided into 3 architectural sets, depending on their spatial distribution and some features that differentiate the sectors from each other:

Set I: Which is made up of a large square with a central U-shaped usnu with round corners open to the east. The walls that make it up are 1.80 meters high by 1.53 meters thick, inside there is a circular water well lined with stone that measures 2.20 meters high by 1.80 meters in diameter. The well has a small staircase of three steps to descend and the usno a diagonal entrance of 3.35 meters wide that communicates with the access road.

All these sets of stone structures and foundations cover an area of ​​approximately 25 hectares, on the west side of the hill. In these sets there are:

It has an area of ​​approximately 25 hectares.

Enough evidence has been found in this complex to determine that the Cojitambo was inhabited during Regional Development Period (500 BC-500 AD),  Integration Period (500-1460 AD) and Inca Period (1460-1532 AD ); since it has architectural features and cultural materials that denounce a very old occupation of the site.

Intercantonal transport service, through the Pan-American Transport Cooperative, has its service station in the Terrestrial Terminal, located on Ernesto Che Guevara Avenue, the route is Azogues-Cojitambo-Déleg, offering its service every 15 minutes, tour time is 30 minutes, until the entrance to access the hill, ticket price 0.45 usd .; Children, students, seniors and disabled people pay 50%. 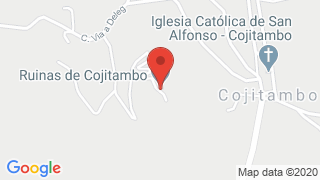