Ecuador is a fascinating destination, which is characterized not only by its biodiversity, you can also appreciate the ancestral culture that is evident in each place. Approximately 1 hour and 30 minutes from the city of Cuenca, stands the archaeological complex Ingapirca, the ruins belong to what was once the fortress of Inca civilization, this space was used as an astronomical observatory, and has the certainty of the way of life of the Inca Indian culture.

In addition to enriching yourself with the culture, you will be able to experience the delicious gastronomy, one of the recommendations is to follow the Azogues route where they sell the famous "cascaritas" of pig. This is a typical food of the zone in which this meat is baked in branches of eucalyptus and its leather is toasted. It is accompanied with mote, potatoes and chili.

Cost: USD 2 for domestic tourists and USD 6 for foreign tourists.

An hour and a half from Cuenca, half a kilometer from the parish center of Ingapirca, in the Province of Cañar, one of the 24 Provinces of Ecuador. There is the Ingapirca archaeological complex, a fortress that the Inca civilization used as an astronomical observatory, where each space evidences how this indigenous culture lived.

Ingapirca Tourism, if you are a lover of culture and adventure you can go to the Tambo Train Station which is 25 minutes from Ingapirca. There you will be able to visit the ruins of Coyotor, and you will have the fabulous experience of knowing the fusion of the Cañari and Inca cultures, the duration of this tour is 20 minutes and costs 7 usd per person.

Many people wonder what do the ruins of Ingapirca represent?

According to scientific studies, Ingapirca's function was specifically religious. As Sun worshippers he worshipped in the shrine and the rest of his spaces were destined for the daily life of the Inca people. Ceremonial acts and in gratitude to the land and was celebrated in the celebrations like the Inti Raymi celebrated every year in the solstice of June. That is why it is also called Ingapirca Temple of the Sun. 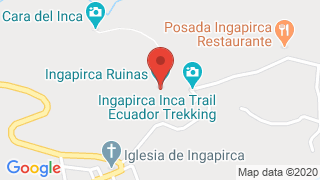