The Huaquillas canton is a border city in southern Ecuador, tourism and commerce stand out. Visit Huaquillas a city that never sleeps.

Huaquillas, The Sentinel without Relay

The Huaquillas canton located next to the border with Peru, is part of the province of El Oro; Huaquillas has an intense commercial movement that contributes to its constant flowering. Its name is deeply linked to the history of Ecuador, pus refers to the large number of indigenous burials (huacas) in the area.

Why is it called Huaquillas?

The Canton Huaquillas is related to the word quichua waquisha, which means "Wind of the afternoon", which determines the name of the canton, which descends from the deepest and most traditional pre-Columbian languages, since its morphology and phonology are close to the sound of the current Castilian of Huaquillas

"The city that never sleeps"

Its climate is warm and dry throughout the year. Its attraction is Puerto Hualtaco a place to taste the delicious typical seafood-based food, also an ecological museum which you can visit or you can opt for a boat ride until you reach the Jambelí Archipelago, especially the island of Costa Rica, the Tourist Center of great relevance that is located in the southwestern border of the country: an area of ​​great importance for the entire ecosystem, that additionally has a great scientific contribution in the area of ​​archeology.

When the sun goes down, the artificial lights come on like multicolored fires on the night face of the city. Every day there is a fair and the traffic of merchants is constant. The locals like partying, and the city is full of tourists in carnivals and at the end of the year, occasions in which sea rice, fish ceviche, goat dry, and many more are served.

Huaquillas is the perfect example of how the strategic location of a city can influence its fame and development. As an active border of southern Ecuador, the town is in permanent contact with travelers and merchants, which is why the origin of people who walk its streets is almost always uncertain. Likewise, life is buzzing in its squares and buildings where products are sold everywhere. The city itself is a huge shopping center that supports any kind of merchandise and where the offers are in any corner.

The international bridge extends through the Zarumillay River connecting Huaquillas with the Peruvian district of Aguas Verdes. Between both cities the commercial movement never rests and develops both from formal establishments and through street vendors. In the area, the US dollar and the new Peruvian sun are used freely.

Among the most striking and easily accessible attractions are El Algarrobo Park, with its classic model clock tower and Hualtaco, a port nestled just in front of the Peruvian coast and where people engage in fishing and tourism. From Hualtaco you can access, in a few hours by renting a boat, Bellavista, San Gregorio,the Costa Rica beach and the island of the Dead or Santa Clara as well as being able to experience a tour to skirt the coasts of the province and the archipelago from Jambelí and land again through the city of Machala.

Limits with Arenillas to the north and is has 5 urban parishes: El Paraíso, Ecuador, Milton Reyes, Puerto Hualtaco, Unión Lojana.

The most visited sites in Ecuador 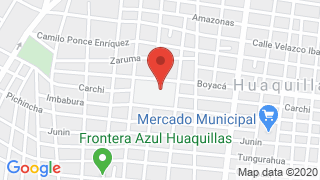