It is very visited by national and foreign tourists in San Lorenzo located in Esmeraldas province, with an imposing beauty manifested during the tour, its natural landscape allows you to perform several activities. At its surroundings you can enjoy a delicious and relaxing bath since very striking small banks have been discovered.
In winter it presents a sensational aspect due to its immense flow, but in summer the opposite happens, since it is completely dry, situation intensified at present by the arbitrary deforestation of its surroundings.

A fantastic waterfall, forming impressive falls that allow you to dive into its warm waters. The view of this waterfall is impressive. The fusion of clean and transparent waters raises a large trail of water spray, a great natural landscape of great beauty, you can see natural pools formed by its waters.

Cascada de la Princesa Tari location. It is located in the limits of the Cayapas – Mataje Ecological Reserve, it is only fifteen minutes by sea from San Lorenzo.
Waterfall of the Princess Tari Climate. It has a very pleasant climate Humid Tropical its temperature varies between 21 and 31 degrees Celsius.

With regard to the flora in the place we can observe various species such as: fine wood, rubber, ceibos, tagua, fibers such as abaca and toquilla, some mangroves, red, white and mangrove jeli can also be observed

You can see parts of humid tropical and forest forests such as: monkey comb, oak and chanul. In the swampy areas there are trees of cuángare, sajo, tangaré, anime and sand

It is very likely to observe species such as the jaguar or the American tiger, the sloths or "light parakeets", anteaters, macaws, parrots, toucans, poultry, boobies, terns, lizards, venomous snakes, among other species.

This is one of the most visited waterfalls in the canton Northwest, its wonderful landscape is impressive, because you can see a lot of birds sitting on the rocks differentiated by their size, color and species. In addition, several animals can be caressed with care.

According to primal oral tradition, a beautiful indigenous princess used to take her morning bath accompanied by a retinue of maidens in the cool waters of the waterfall as part of a purification ritual.

Princess Tari Waterfall Other Attractions: Chocó Forest: It is located between the provinces of Carchi and Esmeraldas, it has the particularity of presenting unique characteristics being influenced by coastal air currents and being one of the extensions of the Colombian Chocó forest characterized by presenting a high endemism both animal and vegetable. 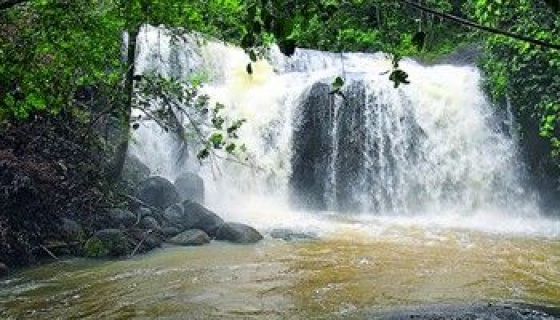