Bartolomé in Galapagos is an island that offers some of the most beautiful landscapes in the archipelago. The island consists of an extinct volcano and a variety of volcanic formations in red, orange, green, and bright black colors. Want to know more

Bartolome Island is a volcanic islet just off the Santiago Island east coast. It is one of the youngest islands in the Galapagos Archipelago. It is named after the British Navy’s Lieutenant David Bartholomew. With a total area of ​​1.2 km2, this island offers some of the most beautiful landscapes in the archipelago. The island consists of an extinct volcano and a variety of volcanic formations in bright red, orange, green, and black colors. A volcano with more than 100 meters high marks the island. It is not famous for its fauna but it is for its lava landscape that seems almost unreal and that makes it possible to go back on the evolution of the islands.

The beach in Bartolomé

Most of the boats stop at the spectacular and famous Pinnacle Rock. If you take a panga (small boat) ride from here along the cliffs, you can usually see the small and friendly Galapagos penguin. This is the only type of penguin that exists in northern Ecuador. Directly next to the Pinnacle Rock are the twin bays, the main feature of the island.

The underwater world is really impressive. You can do surface diving with penguins, sea turtles and other tropical fish. The bay is also an excellent place to swim. The twin bays are connected by a narrow isthmus. On the other side you have the unique possibility of observing female sea turtles (depending on the season) that are waiting for the night in the water of the bay in order to lay their eggs on the beach.

The most outstanding point of all the visits on the islands is without a doubt the trip to the top of a volcano. A path of about 40 minutes takes you to the top of a wooden staircase and walkways.

The landscape is made up of plants that have adapted to dryness like cacti, something so strange that it seems like something from space.

When you reach the top of the spectacular view, it will leave you breathless. This is the most photographed motive in Galapagos and should not be missing in any photo album. You can watch the twin bay, the Pinnacle Rock, the lunar landscape, as well as the underwater crater. In addition you can watch Santiago Island that is nearby and its famous Sullivan Bay that is fascinating.

Bartolome Galapagos Island How to get there

How to move between Islands

Due to the dazzling sun in the afternoon, this walk is recommended to be done in the morning. You will be rewarded for an extraordinary view! 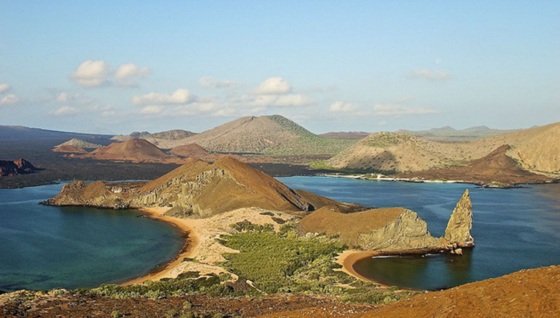