A place that you should definitely visit, The Palenque River located in the province of Los Ríos, is one of the last tropical forests of the Ecuadorian coast with more than 100 hectares of crops and more than 700 species in its fauna.

Tropical forest of the Palenque River

The Río Palenque tropical rainforest is located at km 56 of the Quevedo - Santo Domingo road, the main road linking Quito and Guayaquil. This forest was developed as a biological research station in 1970 by the University of Miami , declared a protected area by the Ecuadorian Government in 1971 and acquired by the Wong Foundation in 1998.

Since its establishment as a Scientific Center, Rio Palenque has been the subject of multiple studies and research with the purpose of expanding knowledge of its fauna and flora. In 1978, CH Dodson and AH Gentry published "Flora of  The Palenque River ", where 1,100 species of vascular plants of various species were identified, of which 30 are endemic to this forest.

The property of the center also includes about 100 hectares of crops with low environmental impact, such as rubber and macadamia trees. In 1971, the Río Palenque Scientific Center was declared a Protective Forest by the National Government, being one of the last tropical forests on the Ecuadorian coast. The forest has many well maintained trails that can facilitate access to the riverbank.

Wong Foundation and the Scientific Center

The Wong Foundation is not a philanthropic or charitable institution. It has programs that empower communities and develop the potential of human resources, creating leaders in rural and technical areas for the company. The philosophy of the Wong Foundation is to promote ecological awareness and responsibility , which implies protecting the biodiversity of the humid forest of Ecuador.

Among the center's projects, a three-year program of domestication of native medicinal plants and bioaccumulation of its active ingredients was executed.  A rich diversity of flora and fauna has been identified in the area and approximately 20% of these are endemic species and are under protection.

In Ecuador there are about 4,000 species of orchids, despite being a small country has a great biodiversity

The Wong Foundation built a beautiful Ecolodge in 2002 for the comfort of those who watch birds and are interested in this humid forest.

It is located on the main road between Santo Domingo and Quevedo at Km 56 just beyond the city of Patricia Pilar. If you are driving to Quevedo, look on the left side for a Palenque River sign.

It is important to make reservations in advance, contacting the Wong Foundation otherwise you will not be able to access the reservation. 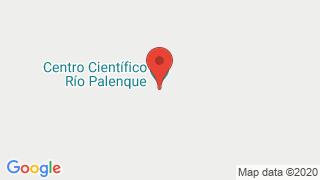