From the pier of Puerto López, in the province from Manabi, tourists set sail for the high seas to boat board with the illusion of observe closely the "famous" whales Humpbacks that come to "fall in love”.

A journey that ends in a dance of love in Ecuador.

The first time I watched her, my heart started beating wildly , It was a mixture of joy and adrenaline. The huge whale was less than 10 meters away from our yacht and it was clearly visible thanks to the crystal clear water of the sea of Puerto López,

The giant cetacean did not even flinch with our presence. He passed stealthily under the ship and a few seconds left the other side. There began the adventure: It emerged from the depth of the sea

throwing a powerful jet of water and then jumped. Came out almost totally of water so we could marvel at his imposing presence in the ocean. My other companions alone they could hear words, unable to close their mouths or eyes.

At that moment I checked what minutes before he had told me guide: who accompanied us “humpback whales measure more than 12 meters long and can weigh up to 40 tons. ” An animal

fabulous, a wonder of nature a few meters from me presence.

They are totally calm animals. My camera did not stop doing click to photograph it every second out of the water. Then emerged another whale a little smaller, but that made its presence felt with sharp guttural sounds that were not scary, but they fascinated by the rhythm with which it did

There the guide explained us again, they are mating dances, because it turns out that these huge animals are as enamored as the man. And that is to surface, throw water, move and even emitting sounds has the sole purpose of wooing a whale female. They actually travel more than 7,500 kilometers, from the cold Antarctica to Puerto López in Ecuador, with the aim of mating and shine in these warm waters that for them constitute a warm tub which they enjoy for three months. Here the huge cetaceans with their life cycle and amaze tourists, scientists and ultimately everyone who embarks on the adventure of going to observe them so closely.

There are those who not only photograph them. Some of us get excited more and we can even sponsor a whale. I am the godmother of Antonia, one of the youngest of the pack, explained a expert who claims to identify it since all these cetaceans It has a footprint in the queue that lets you know who it is.

From June to September Puerto López and other areas of the Coast Ecuadorians are full of life, thanks to these giant cetaceans. Cameras of videos and photographs, perpetuate their

moments On my part I pack suitcase, equipment and a lot of adrenaline for go looking for my goddaughter Antonia in this season that is about to start

As hundreds of other people do each season, Holger Dueñas arrived from the north of Guayaquil in the company of his wife and a friend to observe cetaceans for the first time. "It seems to me

spectacular, it's a wonderful thing, we had the opportunity to see them jump twice, "he said excitedly to Andes.

According to Julio Pin Córdova, naturalist guide of the National park Machalilla, since the end of May of each year begins the influx of whales to Ecuadorian waters.

"First the young people arrive, then the males arrive followed by the female, to finally get pregnant; as we already know here they mate, that's why we observe courtship and romance, then come back to give birth to their young, "he described.

Puerto López is a privileged scenario for the sighting of humpback whales that after traveling 7,000 kilometers from the Antarctica arrive to star in a unique show that summons to thousands of domestic and foreign tourists.

The preview of this busy show was given with the arrival of a group of cyclists who traveled 910 kilometers from Archidona, in the province of Napo, promoting the festival and other charms tourist of the manabita canton.

Tourists and villagers concentrated on the Malecon street to observe a proclamation that some schools prepared, where posters, dances and the participation of children was the main attraction of the late.

Puerto López has a capacity of 2,200 averaged beds in 80 hotels Around the canton.

Mercy Bazurto, owner of Tuzco lodge and representative of the sector hotel, highlights that in addition to the whales Puerto López offers a countless attractions that make tourists return, among these Los Frailes beach, the white water commune with an on-site museum, lagoons with sulfur water, ecological trails.

Commune Salango with an archaeological museum and a marine plot where you can see goldfish and other varieties that It offers marine fauna.

With the regulation by the Ministries of Environment and Tourism,  for this event there are 33 legally authorized operators, with a value of 25 to 30 dollars you can access the package of whale watching that includes the tour with a maximum of three hours, a snack and a visit to the island of Salango. 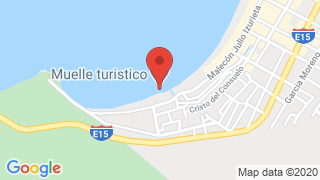