Santo Domingo de los Colorados is a beautiful city and tourist destination of Ecuador for its natural and cultural wealth, also a point of link between big cities.

It is the largest city in the province of Santo Domingo de los Tsachilas - Ecuador, bears the same name. Migration has marked the population of this canton in different historical periods throughout the twentieth century. The Dominican order was established in this area, from where the name Domingo originates, and also by the indigenous people that paint their head red, the colorados.

The most striking tourist places in the Santo Domingo canton are found in natural areas, endowed with high biodiversity, in a variety of ecosystems that extend in an area with a high endemic species index.

It has four protective forests: Delta, La Indiana, Río Lelia and Tanti. Is possible to do bird watching and rafting on the Toachi river. The San Francisco ecological park and Mount Bombolí  are a natural viewpoint of the city in which there is a church. In Valle Hermoso there is a waterfall and hostels.

The nightlife of Santo Domingo mainly revolves around the Quito Avenue and the so-called Zona Rosa of the city located on Av. Abrahám Calazacón, which starts from the police circle, there you can find a wide range of bars, karaokes, four hotels stars, discos, shopping centers, fast food stalls.

Climate of the city of Santo Domingo

It is a tropical rainy climatic zone, its usual temperature is about 18 to 33 ° C in summer. In winter it is usually warmer, from 23 to 34 degrees and sometimes reaches 38 ° C. Its average temperature is 25.5 ° C and a volume of rainfall from 3,000 to 4,000 mm per year. The closest beach, Pedernales, is 120 km away, one hour down the new road Concordia - Puerto Nuevo, a 32-kilometer, two-lane artery. It is paved and has little vehicular traffic. Those who arrive at La Independencia must advance to the round of La Concordia and from there take the new path, which is also known as Latitude 0.

Cooking with carbon or wood and banana leaf is one of the characteristics of the cuisine of the Tsáchilas, several dishes are prepared in this way and the recipes have been transmitted for generations in order to keep this custom that accompanies them since they settled in Santo Domingo.

With guadúa cane, sand and natural charcoal or firewood, most typical dishes of the nationality ara cooked, in the cultural centers of the communes and in several of the houses of the natives this ancestral form is still appreciated of preparing food.

The banana leaf (baca jua in tsáfiki) is the main element for cooking, it is used to vaporize and roast food, especially freshwater fish such as guaña and tilapia, although the latter has been introduced as a gastronomic adaptation.

Culture and Traditions of Santo Domingo

The cultural characteristics of the Tsáchilas are unique in the country. Its multicolored clothing, the tsáfiqui (their language) and their customs attract the people to visit their communes, meet those who paint their hair with 'mu' (achiote), put yourself in the hands of the 'poné' or shamans to perform a cleansing and tour their homes to learn about their way of life.

The Peripa commune, which is located at kilometer 7 of the Quevedo road, The section that leads to Puerto Limón is said to be a sacred place where they used to baptize the poné. There is the archeological site Koleka-napi (small water snail), where there are some stones

sculpted in human and animal forms that would represent the deities they believed in.

In most of the tsáchila communes still continue to build their houses with wood and pambil and in their surroundings they plant yucca, corn, banana, coffee and short cycle products; breed poultry and keep domestic animals.

Before the arrival of the colonizers it was populated by the Tsáchila natives, better known at the time as Colorado Indians. The first reference that is dated from the 16th  century.

Dominican priests arrived in the region in 1660 to evangelize native peoples, almost a century later, the first maps of Santo Domingo de los Colorados - Province Santo Domingo were designed, by the surveyor Pedro Vicente Maldonado in the year 1750.

President Eloy Alfaro Delgado officially created the town of Santo Domingo de los Colorados, since then the settlers were increasing: day laborers, rubber workers, public works contractors and landowners. In 1944 returns to be part of the Quito Canton. Colonization is

intensified in the 50s of the twentieth century and became the city with higher growth rate in the country, this is due to the strategic location of the city as a junction between roads and cities. 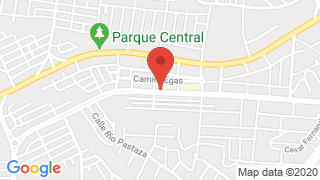