The Patate canton is known as "The Valley of Eternal Spring”, recognized as a magical town of Ecuador, located in the province of Tungurahua.  From this valley you can see the activity of the Tungurahua volcano. cultura, naturaleza y gastronomía de é

The Patate canton belongs to the province of Tungurahua. The Tungurahua Volcano is located within its territory. This agricultural town lies in a valley between green mountains at 25 minutes from Ambato. Patate has different heights ranging from 2,000 masl up to 4,000 masl and its climate is mild and dry, ideal for cultivation of all kinds of fruits and vegetables.

Although the population is primarily engaged in agriculture, the city center contains several cultural attractions. Among them is find the religious and archaeological museum of the Lord of the Earthquake and its sanctuary. Ceramics and utensils of the Panzaleo culture are presented there as well as religious images and figures of the Quiteña School that date from the seventeenth and nineteenth centuries.

The Lord of the Earthquake Festivity takes place during the first days of February with the participation of all the parishes of Patate. Flower and fruit float parades and folk dances represent the thanks from the villagers to their patron saint.

Around the central square Simón Bolívar there are several coffee shops that prepare arepas, baked pumpkin pie pies achira, and grape chicha, artisanal wine that is prepared with apple, blackberry, opener and grape.

How to get there?

Here are some tourist places in Patate:

Half of the territory of the Patate canton is part of The Llanganates National Park from whose moors are born many of the rivers of the province. Expeditions can be made through the waterfalls of Mundug and Las Golondrinas or visit the lagoons of San Borja and Cocha Negra, Kuripishku Route, Sudahua Lagoons, In the city of Patate you can enjoy the parks like the playground, Simon Bolívar Park and the church of the Lord of the Earthquake . 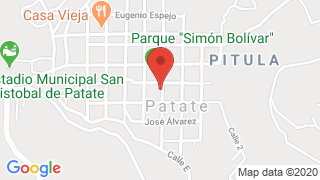