For those looking for alternatives to cruises and excursions in Galapagos, Puerto Baquerizo Moreno presents a variety of options for charming excursions in Ecuador.

Capital of the Galapagos Paradise

Puerto Baquerizo Moreno, is the administrative capital of the province of Galapagos, a place with several tourist activities and options of accommodation, shops, Internet cafes, banks, telephone centers, restaurants and travel agencies. It has a population of more than 6,672 inhabitants and is the second most populated island after Puerto Ayora.

It is extremely arid, it has two distinct seasons: a hot season and a cool season. The temperature has a particular behavior, since for every 100 m of elevation the temperature decreases by 1 ° C. Also, the rainfall varies from 350 to 1,800 mm, at altitudes ranging from 0 to 700 meters above sea level.

Regarding the climate, the heat is strong in the month of January, when the sun's rays impact perpendicularly during the midday, warming the coastal waters giving way to the courtship of certain species that come to these coasts to mate, including the stingray. The heat decreases at the end of April, when a period of cooler weather begins.

The Spaniards gave the first names to the islands, "the old Spanish names", but it has not been possible to identify with certainty which ones they correspond to, for lack of a reliable map. The first one who built a map and named eight islands was the English pirate Cowley in 1684, but in an ambiguous way, since the 'Charles Island' is confused with the Floreana, Hispaniola or San Cristobal Island. 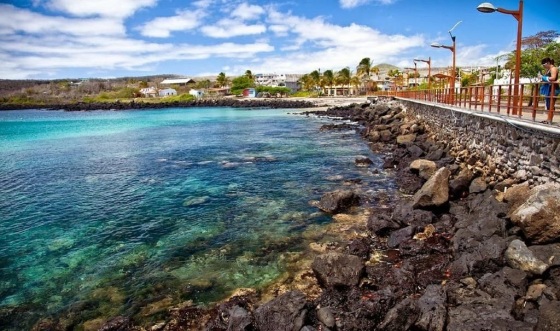