The Panecillo of Quito

It is the most important natural viewpoint of Quito city - Ecuador, Cultural Heritage of Humanity. Next to the Virgen del Panecillo, you can appreciate the Historic Center of Quito You can not miss this place! 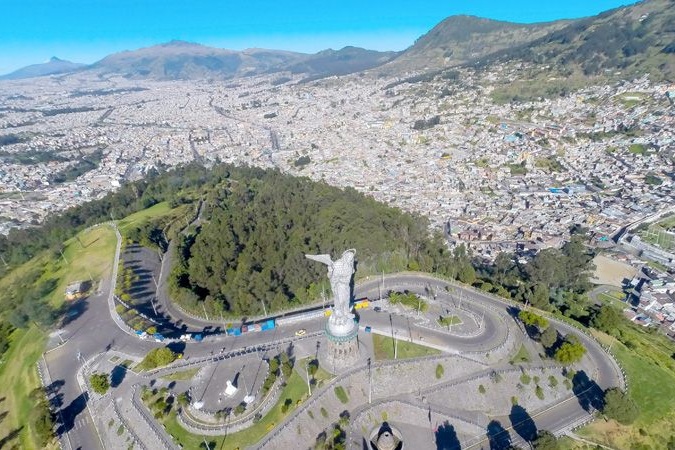 Virgin of the Panecillo

The Spanish artist Agustín de la Herrán Matorras in 1975 made the monument to the Virgin Mary in aluminum, which today is the most memorable  El Panecillo point which is actually a mound that is nestled in Quito city, received this name of the Spanish conquerors, but it seems that its authentic name in Quichua is "Shungoloma" which means "Loma del Corazón". It is a reference for the Quito people because it  marks the division between the south and the center of the city; it still maintains the legacy of the Inca era because there is the Pot of Panecillo, a kind of circular cistern eight meters deep that was used for irrigation of crops.

The Panecillo is a natural elevation of 3,000 meters above sea level, it was baptized with this name for its resemblance to a small bread; It is nestled in the very heart of Quito city. It is one of the most visited sites in the city. Due to its location it has become the most important natural viewpoint of Quito city declared as Cultural Heritage of Humanity, from which you can see the urban layout of the capital, from the Historic Center of Quito and the emblematic La Ronda street and towards the north and south ends.
Throughout the colonial era the Panecillo marked the end of the city by the southern end, and therefore travelers arriving from cities such as Ambato, Guayaquil, Latacunga, Lima or Cuenca knew, when seeing it, that their arrival in Quito was a matter of A couple of hours nothing more. The hill had a forested part, especially on the south side.

El Panecillo How to get there?

To climb to the viewpoint on foot, you can use one of the most important roads that starts from García Moreno Street in the heart of the Historic Center of Quito; If the ascent is done in a vehicle, you can proceed using Melchor Aymerich Avenue, which is the only way that communicates with the dome.
To go to the Panecillo, especially inside the monument of the Virgin of Quito, we recommend going between 9:00 a.m. and 6:00 p.m. from Monday to Friday, Saturdays and Sundays from 9:00 a.m. to 5:00 p.m.
There are a couple of restaurants located on the top of the hill where you can enjoy a spectacular view of Quito, as well as taste an exquisite meal.
For your safety we recommend you not to visit this place without a tour guide and if possible get on a private means of transport.

As a vestige of the Inca period in this sector we find “the Pot of Panecillo”, which is a kind of circular cistern eight meters deep that was filled with rainwater that was used to irrigate the crops of the place. In colonial times, the water that was collected here served to irrigate the gardens of the Bellavista mansion and then was used as a defense site for colonial troops during the Pichincha libertarian battle, on May 24, 1822.

A legend of El Panecillo tells us that there was a woman in Quito who took her little cow daily to Panecillo. It always happened there because she didn't have a paddock where to take it. One day, while collecting some firewood, he left the cow near the pot. On his return she no longer found it. Filled with fright, he started looking for her around.

A few hours passed and the cow didn't appear. In his eagerness to find her, he went down to the bottom of the same pot and his surprise was very great when he reached the entrance of a huge palace. When he could recover from his astonishment, she saw a beautiful princess sat on a luxurious throne.

Seeing the humble lady there, the smiling princess asked: - What is the reason for your visit? - I've lost my cow! And if I don't find it, I will be in the greatest misery,”the woman replied sobbing. The princess, to calm the suffering of the lady, gave her a cob and a brick of gold. He also comforted her by assuring her that her beloved cow was safe and sound.
The woman thanked the princess and left happy. When he reached the door, he had the big surprise! -There's my cow! The woman and the little animal returned home.

The Panecillo is currently crowned by a giant aluminum sculpture of the «Virgin of Quito», created in 1975 by the Spaniard Agustín de la Herrán Matorras, which was based on the Virgin of Legarda or Virgin Apocalyptic; 18th century work by Bernardo de Legarda, one of the most important representatives of the Quito School, which we can see on the main altar of the Church of San Francisco.

One of the attractions of the Panecillo is the viewpoint, where you can see the immense contrast between the old city and the modern city. The only thing that has not changed over time is the sky, which will always be a transparent blue that is a Quito blue. However, the Panecillo at night will give you a fascinating show, being able to admire Quito city and the enlightened Virgin of the Panecillo.

Legend of El Panecillo is found in the book Legends of Ecuador, by Edgar Allan García, an interesting legend is told which is narrated below:

Before the Spaniards arrived, this site was known as Yavirac, and there, on its top, the indigenous people before the Incas, and later the Incas who invaded these lands, celebrated the Inti Raymi, the great festival of the Sun. So, on June 21 of every year, the natives of different regions gathered in the Yavirac to sing, dance, drink and praise, in a round of joy, the highest lord of the sky who died every afternoon and was reborn every morning, to the generous Inti.

Well, according to the Atahualpa legend (which was actually called Atabalipa) he had ordered a temple of pure gold to be built on top of the Yavirac. Reason why after Spaniards killed the Inca Atahualpa (who was 33 years old at the time), they hurried to Quito with the desire to divide the Golden Temple that was on top of the Yavirac.

The sweaty and tired Spaniards climbed to the top of the Yavirac found that there was not a single nugget of gold on the dry land, the Temple of the Sun had disappeared as if by magic. But what they did not know, nor did they ever know that inside the Yavirac, in the heart of the hill, entering secret roads full of poisonous spiders and gigantic scorpions and gorges full of deadly traps, is the Temple of the Sun, guarded by hundreds of beautiful maidens who never grow old and for a wise old woman who is allegedly the very mother of Atahualpa.

In addition, the legend says that: if you manage to find the entrance, and after saving yourself from the dangers that await you, you finally reach the abode of the old woman, you have to think very well about what you say and do. If the old woman asks you staring into your eyes, what are you looking for in those sacred precincts? You have to say that you are poor, that you have gone there by accident, that you are only looking for the exit and that you swear never to reveal the secret entrance to that temple.

The old woman will then rise from her throne of solid gold; It will make you choose between a huge gold stone, plus a handful of pearls, rubies and emeralds that are on a table, and a corn tortilla, a cob of sweet corn and a well with juicy nickel that are on another table. Think about it, because if you choose the first table, it is likely that when you leave you will find that instead of wealth you only carry a piece of brick and a few common stones in your hands.

And it is also probable that, if you choose the foods that are found on the second table, the tortilla suddenly becomes a huge piece of solid gold, the sweet corn in numerous silver nuggets and the well with nickname in a large number of pearls bright. Choose well, because it is likely to happen the other way around, and that once outside there is no way to go back.

Tourist Places of Quito that may interest you 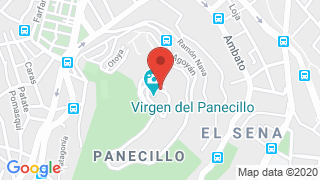