The legend of Cantuña refers to this square, the largest and most representative of Quito. Tourist place of obligatory visit for the tourists who arrive at the Carita de Dios in search of histories, legends and culture.

Useful Information Valuation: One of the largest in Quito, this square is a plain of volcanic stone in which you will find the church and the convent of San Francisco, one of the most imposing architectural complexes in America.

It was built in 1550 and, since then, its twin bell towers are part of the postal image of the Historic Center of Quito.

Since pre-Inca times and before the Spanish conquest, it was the main market of the area, where all the products coming from the sea, the Andean countryside and the Amazon were traded.

Plaza de San Francisco, where pigeons meet every day, and walk along the roofs and facades near the square. In the beginning the square was consecrated to St. Paul and not to St. Francis.

There are different points of view on the subject that was formerly the Plaza de San Francisco.

Based on the historian's criteria, Charles Freile, it is controversial because its past could not really be determined. Some indicate that the space was used as a weekend market and even this space was used as a bullring.  "Tradition has it that in the past (where the temple of San Francisco is) the Palaces of Pleasure of Huayna Capac were there, that is, a royal palace", the ancient Inca conqueror over the territory of Quito, which came from the great Inca Empire and was enlarged thanks to the link made between Hualpoco Duchiela - of Puruhá people - and Princess Toa - of Cara- country. The Inca invasion lasted 50 years until the arrival of the Spaniards, which is why it is indicated that during this period they could not build such a large architectural work. On the other hand, historian Enrique Ayala Mora points out that "in the land that now occupies the historic center there was no city as such, but there were constructions like ceremonial centers, all that was in today's San Francisco". However, Carlos Freile disagrees and assumes that: "At the arrival of the Spaniards this was a market with commercial purposes that was attended on weekends, in what is now the square.

Quito was a central point for commercial barter which was known as 'maru cancha', that is, an open space for marketing. And precisely because it was so important, some time later the first Spanish religious order was installed, that of San Francisco. And in the same way, it was an improvised bullring, and helped to expand sales in the Plaza de San Francisco in the Colonial Era. However, one thing that historians agree with is that there is no archaeological evidence, or documents on the use of space in what is now the Plaza de San Francisco Muñoz says, as there is no evidence, you can only imagine that use had the space. but what can be assured is that today stands an icon temple of the ordination of the Franciscans. 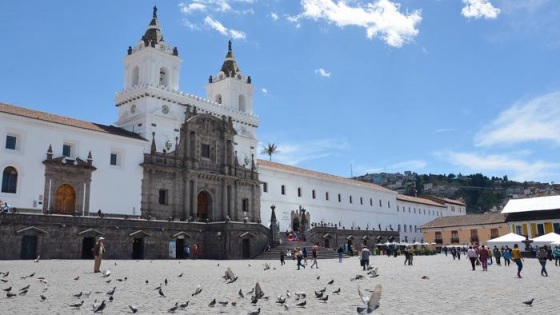